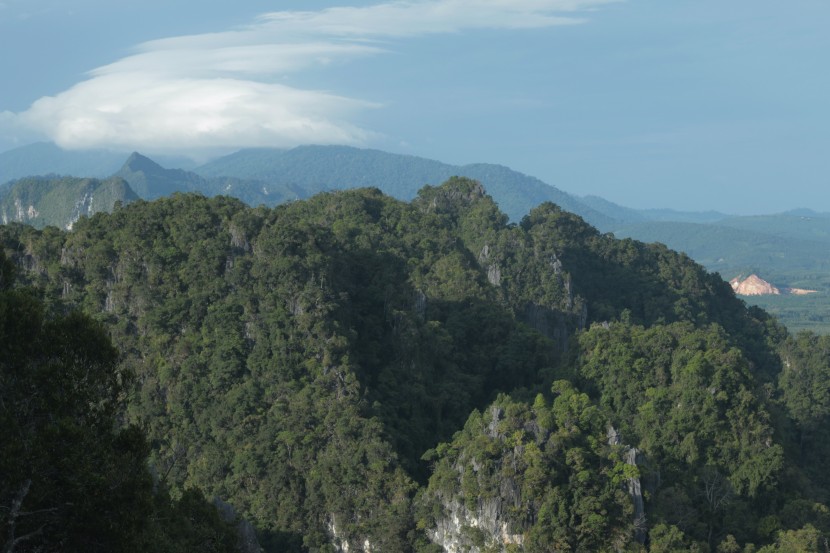 
I can proudly say I reached one of the heights of Buddhism in Krabi. No, I did not achieve Buddha’s illumination yet, but I literally climbed my way up to a Buddhist climax: 1237 steps up to the Buddhist temple in the Wat Tham Sua, meaning the Tiger Cave Temple, one of the must visits of Krabi.

Buddhism is the main religion of Thailand, but the further you travel towards the South, the more you sense the i 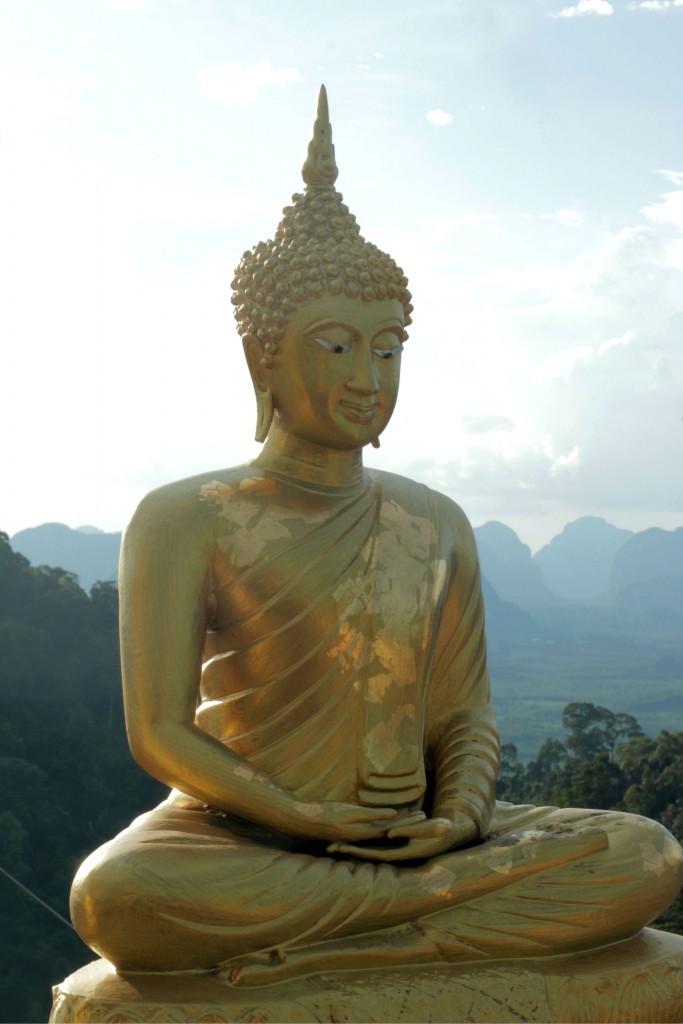 nfluences of Islam, Thailand’s second largest religion. The Thai Government’s National Statistics Office’s data shows that 94,6% of the Thai population is Buddhist, 4,6% Muslim, 0,7% Christian and less than 0,1% adhere to other religions. In Krabi province there are almost as many Muslims as Buddhists: roughly 60% is Buddhist and 40% Muslim. This makes Krabi the perfect place to take a dive into Thailand’s religious cultures and history: the Tiger Cave Temple representing Buddhism, while the Central Mosque of Krabi is one of the largest and most important ones in Thailand. (more about religion in Thailand here)

I stayed in Ao Nang, a little city near Krabi town, and it took some time before I got used to the Mosque’s call to prayers. The atmosphere was very different from the rest of Buddhist Thailand where I stayed, but the people were the same: friendly, warm and helpful.

Just before going to my hotel, I took a look at a map hanging in Krabi Airport’s arrival hall. It was a colourful, graphic map, and an inviting image of a temple on top of a mountain caught my eye.  “Wat Tham Sua”, there is where I should go! I got into a taxi that took me straight to the hill. I could see the temple from the car, crowning the mountain top like a shimmering jewel. I was rather surprised when the car suddenly stopped. We did not do any particularly steep road, so how could I have reached the mountain top already? I was soon to find out.

I got out the car and entered the Wat Tham Sua. As “Wat” means temple complex, there was plenty to see besides the temple itself. There was a lower temple located in a cave near the entrance. The story goes that a tiger had been living in this cave, which is why it’s called “Tiger Cave Temple”.

When entering the cave, I was greeted by a couple of nuns. They put a brown knitted bracelet around my wrist, and in exchange I gave a little donation. These bracelets are the so-called Sai Sin bracelets, which the monks bless in a special ritual. These bracelets are said to bring good luck and protection, and you can wear them as long as you like. I like to keep it until it falls off. 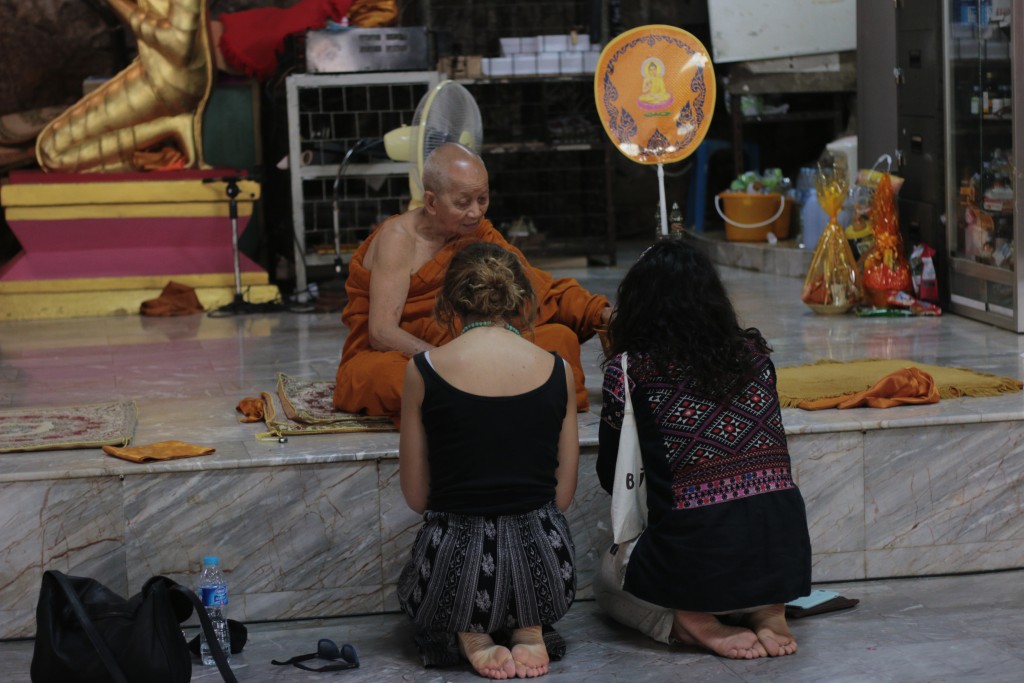 My friends, who already entered before me, were kneeling in front of a Buddhist monk. They had been called by the monk to receive his blessing; he said a prayer and sprinkled water upon their heads. It was beautiful to witness. Later he asked me to join, and I received the same treatment. I may be very sensitive to these experiences, but wow, what a feeling it left within me. The monk handed us other bracelets and against all rules, he was happy to be filmed. This monk really inspired me: he seemed to find everything around him hilarious. He laughed so vitally, he embodied real joy. Now wouldn’t it be great to see the world through his eyes?

I tried to do that too, and the result was that I walked out of the cave feeling as if I was floating. The feeling was very similar to being in love, but much, much greater: what I sensed in that moment was completeness, right there where I was and as I was: a bursting sensation of gratitude travelling to every extreme of my body. The monk had been able to pass on his unconditional joy.

What a richness do the Buddhist monks have, even if they just eat a little plate of vegetables in the morning, even if they wake up before sunrise every day. It is not uncommon for Buddhists to become a monk or a nun for some time: especially men decide to retreat in a Buddhist monastery for a period of three months. During that period, they dedicate themselves completely to meditation, starting as early as 5 o’clock in the morning. After their morning meditation, the monks usually walk around (barefoot) in the neighbourhood to collect the food offers from the local people. They then return to the temple to eat their breakfast and new prayers and meditations begin.

Of course, meditation is not all there is to being a Buddhist monk: there are all kinds of duties they must undertake to maintain the temple in good state, such as cleaning and gardening. Many are also involved in teaching durin 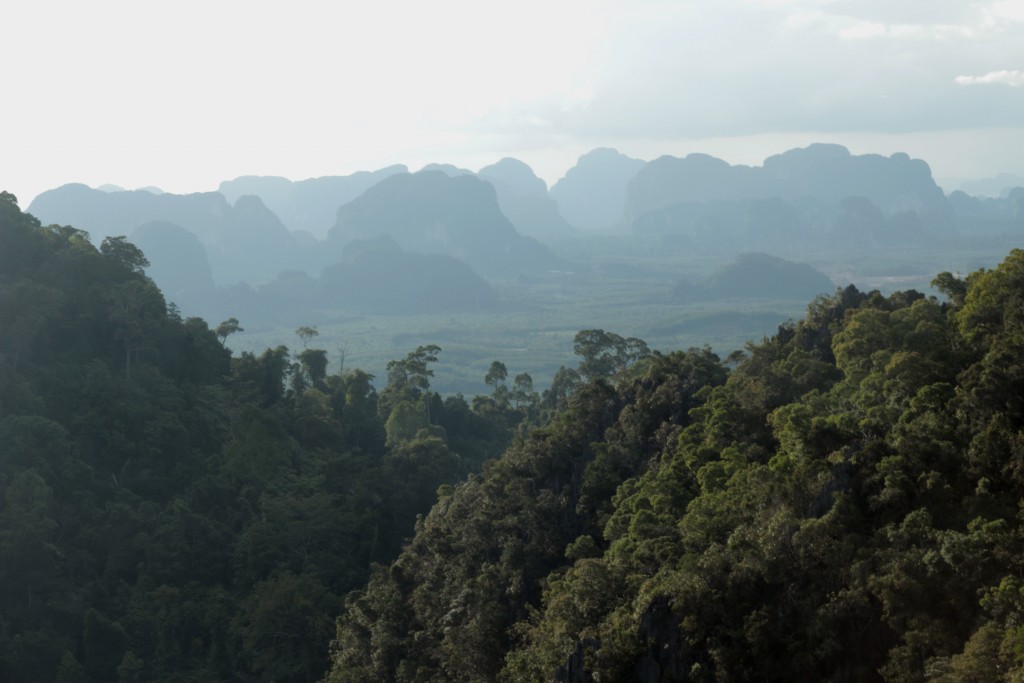 The climb to the upper temple

Floating around in my own world, I slowly reached the stairway to the famous temple. I wasn’t really aware of what I got myself into, really. 1237 steps expressed in numbers will never give you the real picture of what the climb actually means. My view of the stairway stretched pretty far but I probably didn’t see more than the first 200 steps.

What a climb, what a climb. The buddhist monks make their way up every day. Several times I stopped to take a little break, an occasion to turn around and look at the breathtaking asian landscapes spreading out in front of me. Already stunning halfway, but the view from the top was truly impressive. An enormous golden Buddha watches over the valley. Although open air, it is a temple by all means: no shoes are allowed and you should be dressed properly.

During the climb I came across all kinds of people, from a 5 year old to 65 + (at least!). People descending the stairs had a satisfied look on their face, and many of them motivated us climbers: “Don’t give up, it is worth it!” I also met some people look-a-likes: monkeys! I tried to shoot some family portraits. Especially mother monkey was interested in a personal photo shoot. 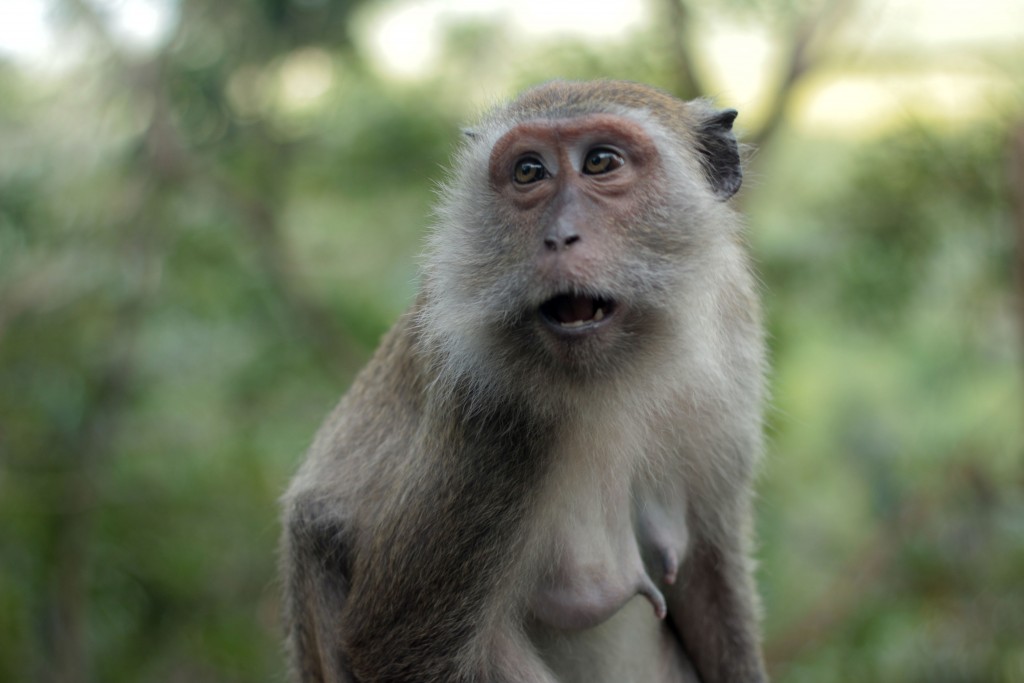 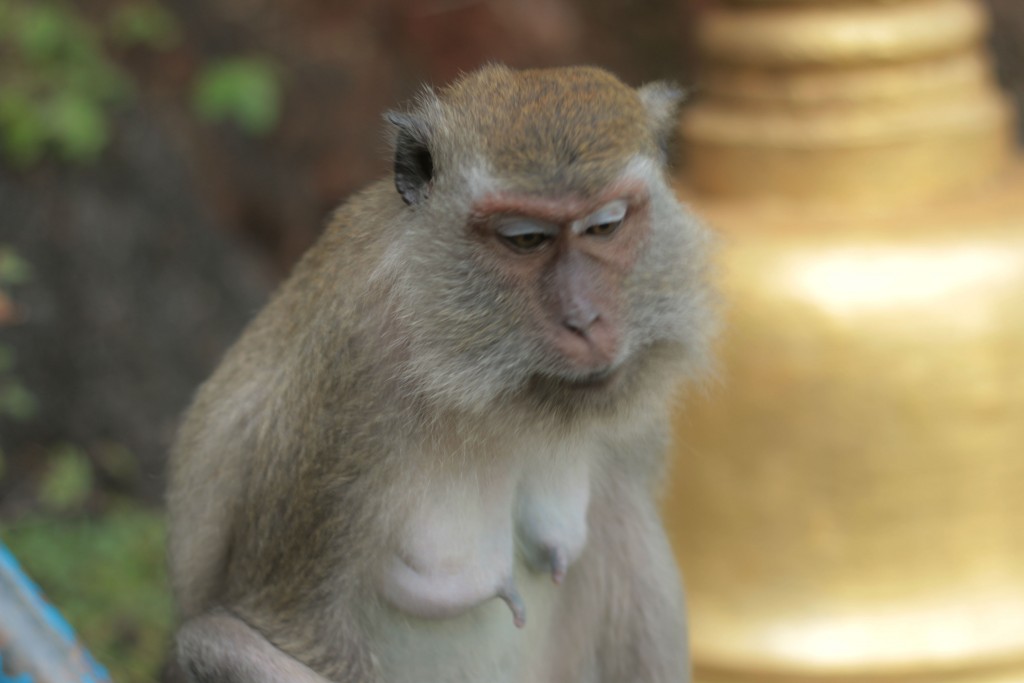 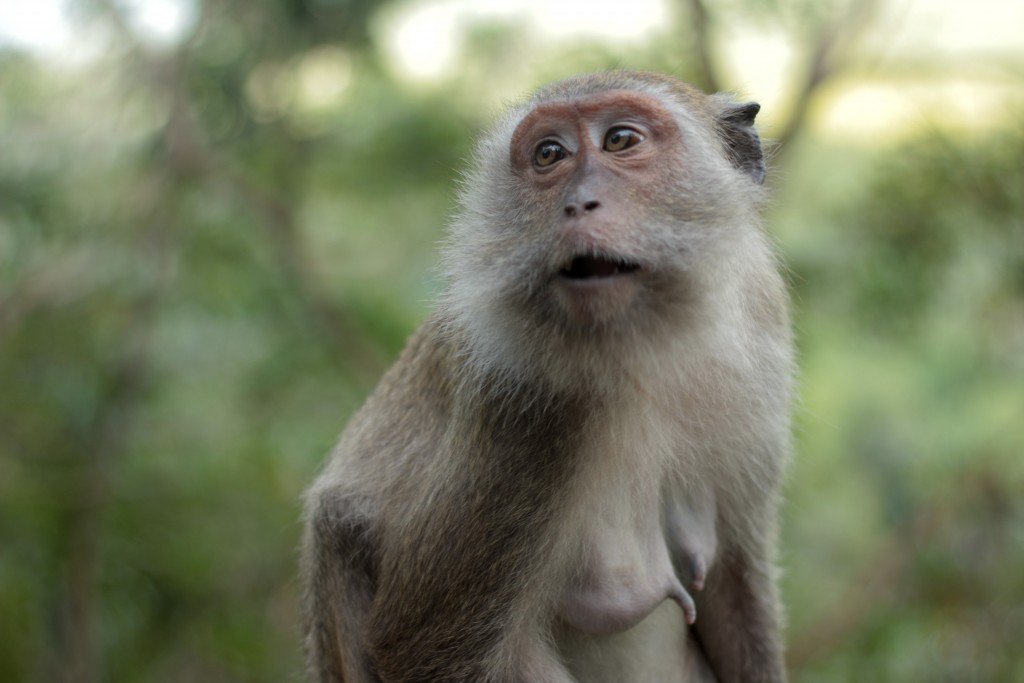 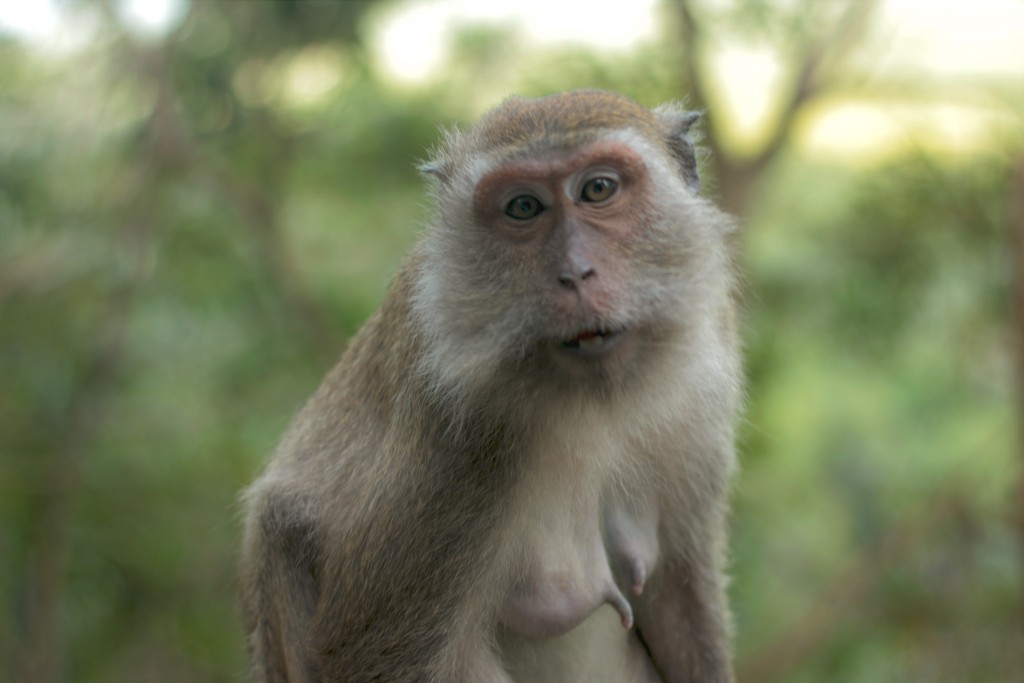 Like I said, to reach the upper temple is worth it for the eye, but it is for the mind too. The Wat Tham Sua of Krabi is a special temple because it is a practical expression of Buddhism. It forces the ones who want to visit the temple to apply Buddhist principles as they ascend the mountain, making the actual climb not just a journey to the top but also a fulfilling journey towards introspection. You can reach the top only if you believe in yourself.

As a Buddhist saying goes, “If you want to climb a mountain, begin at the top.” Begin at the top, envision yourself already up there. If you can walk with the idea that you have reached the top already, the climb becomes much easier. The mountain of Krabi can be a practical lesson, but when trying to apply this idea to other aspects of life it becomes clear how powerful this lesson is. What would you like to achieve and how would you feel? Can you walk with that feeling today?▪