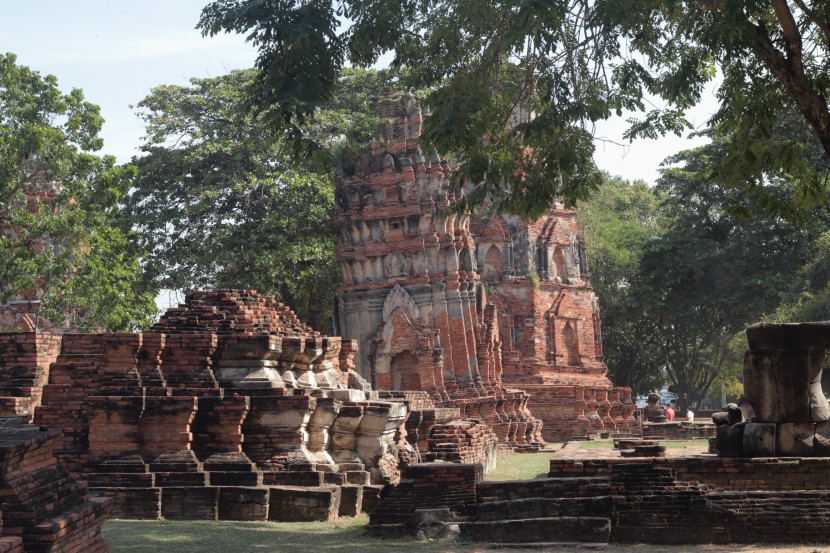 
“What is Thailand? I am not from Thailand, I am from Siam!” These words were shouted aloud amidst of a conversation about Thailand’s history by a dear friend of mine. A really eye-opening conversation.

We sat in the shades of the trees in a local coffee house in Ko Lipe, sipping our home made Chrysanthemum drinks. As I tasted all the juices lady Nu made in her coffee house, I received a lesson of Thai history. 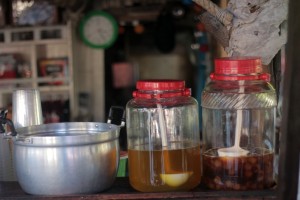 “You see,” he continued, “Thailand has changed its name only in the 40’s. Thailand means land of the free, we were never colonised.” True story, Thailand has always been able to resist the western and Japanese colonists, unlike other Southeast Asian countries. Siam changed its name to Thailand in 1939 under fascist leader Phibun out of pride and nationalism to underline its colonial resistance, after which the country was named Siam again after World War II. In 1949, Siam was renamed Thailand for the second time.

Could it be because of this that the “Land of the Free” is so open to tourism? In fact, the Thai have never been as suspicious about tourists as other Asian countries have been. All I hope is that this will not work against them: could the absence of a colonisation trauma lead to a faster loss of traditions? Paradoxically, it seems as if other Asian countries are more careful in preserving their essence because of the past invasions they went through.

Siam, my dear friend likes to say he comes from Siam instead of Thailand. Well, what about Siam? Siam was born under the Chakri dynasty (still ruling today) in 1782 together with the capital of Bangkok. It didn’t came out of nowhere. Before Siam, the Thai people had known various kingdoms: there was the Sukhotai Kingdom in the 13th century, a century later incorporated in the Ayutthaya Kingdom lasting more than 400 years. Eventually, the Birmese succeeded in burning down Ayutthaya in 1767 and Thonburi became the new capital. The Thonburi Kingdom lasted until King Rama I of the Chakri dynasty became the ruler and moved the capital to a little village of the other side of the Chao Phraya river: Bangkok.

I travelled through time, imagining battles and victories and picturing colourful scenes of the rise and fall of various kingdoms as my friend spoke on and on. A question drew me back to reality. “Ayutthaya, have you been there? Have you seen it?” No, I did not see it. “When you go back to Bangkok, go see Ayutthaya.” He added: “Ayutthaya for Thai people is what Rome is for the West!” 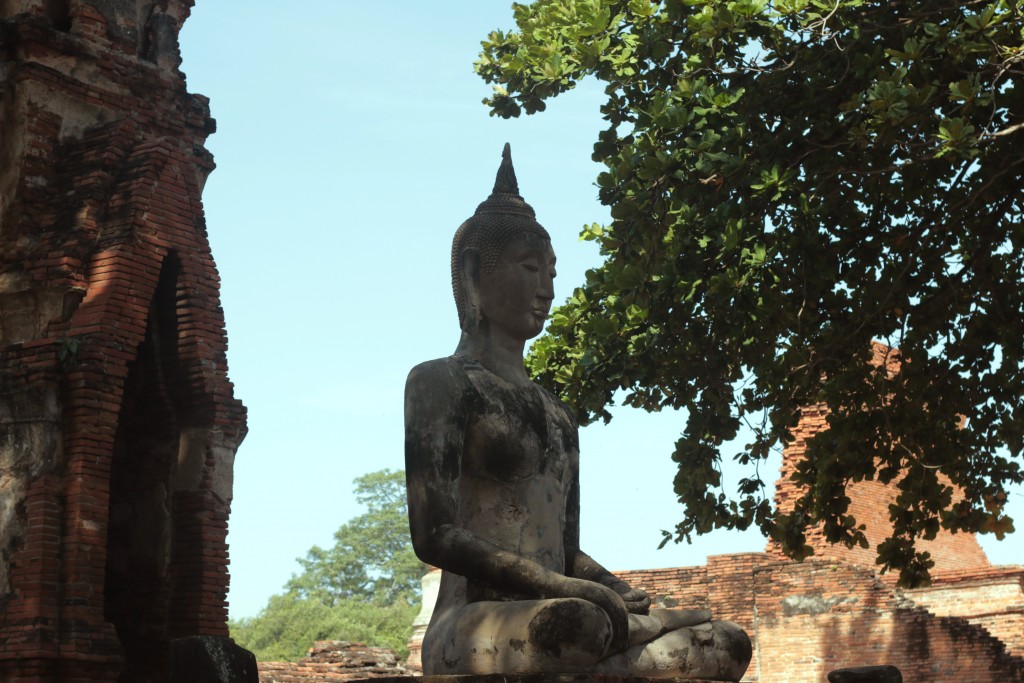 And so I did. I came back to Bangkok and took a day to visit the old capital of the Thai people. At the Wat Phra Maha That, or “Monastery of the Great Relic”, I stood eye in eye with the ruins left behind by the Birmese. It used to be one of the most important monasteries of the Ayutthaya kingdom (source), but the Birmese had no mercy. Those battle stories I was told, finally took shape in my mind: the ruins speak more than eloquently about the impact of this tragedy. Especially the headless Buddhas are impressive. 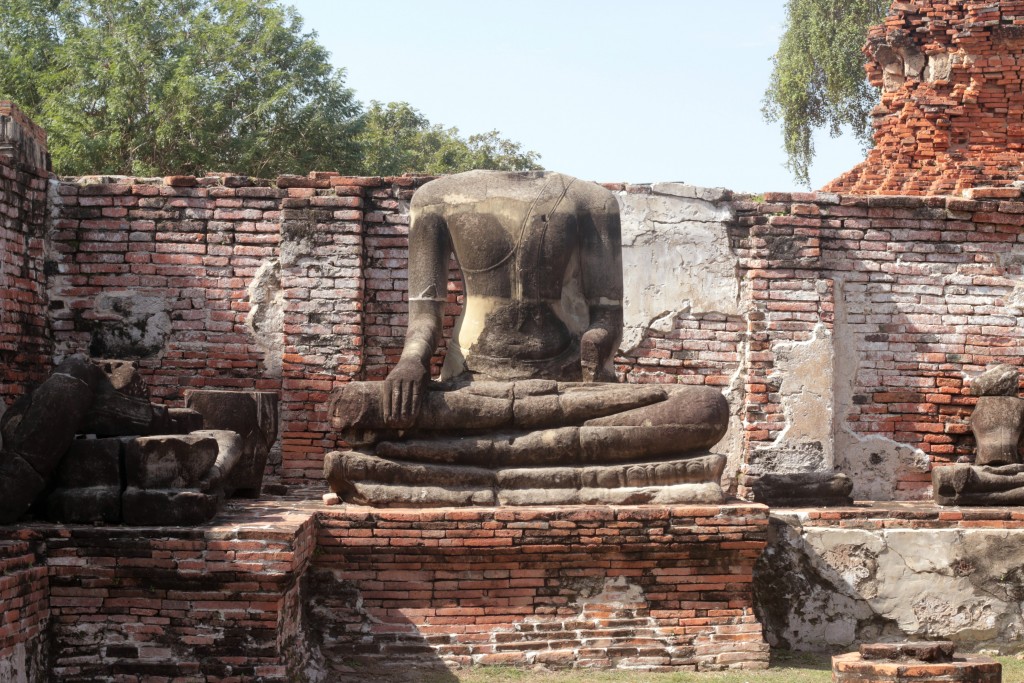 One of the Buddha heads, however, survived. Today it is entangled between the roots of a tree, as if nature itself offered her protection. 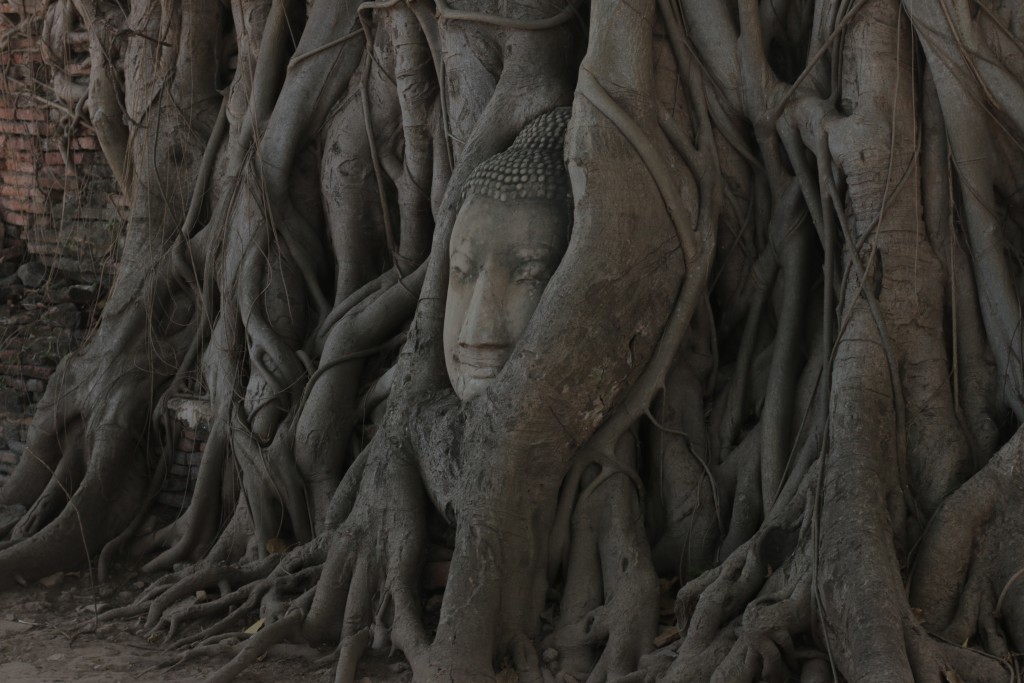 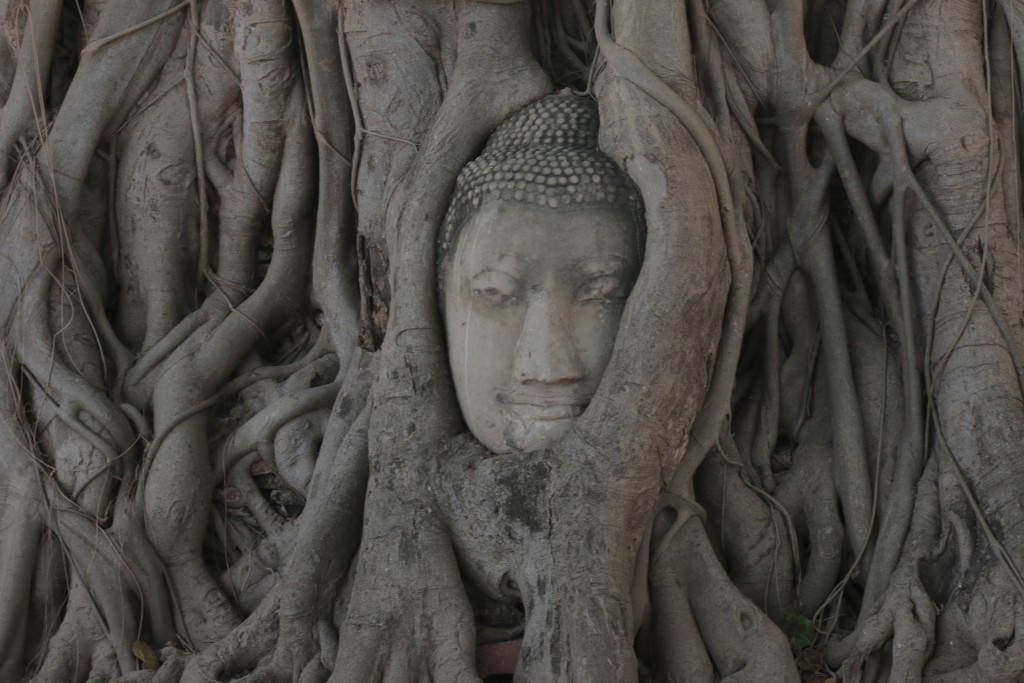 But what were the temples like before the Birmese set the city on fire? There is one temple that survived the Birmese attack: Wat Na Prhamen. This temple has an impressive Buddha statue whose eyes seem to follow wherever you go, staring right into your eyes. The decoration of the temple leaves an idea of what richness and beauty Ayutthaya was filled with: the ceiling is adorned with gold and precious stones, while the Buddha statue is presented with the royal dress, crown and other ornaments. It is the largest and most beautiful crowned Buddha to survive the Birmese attack. 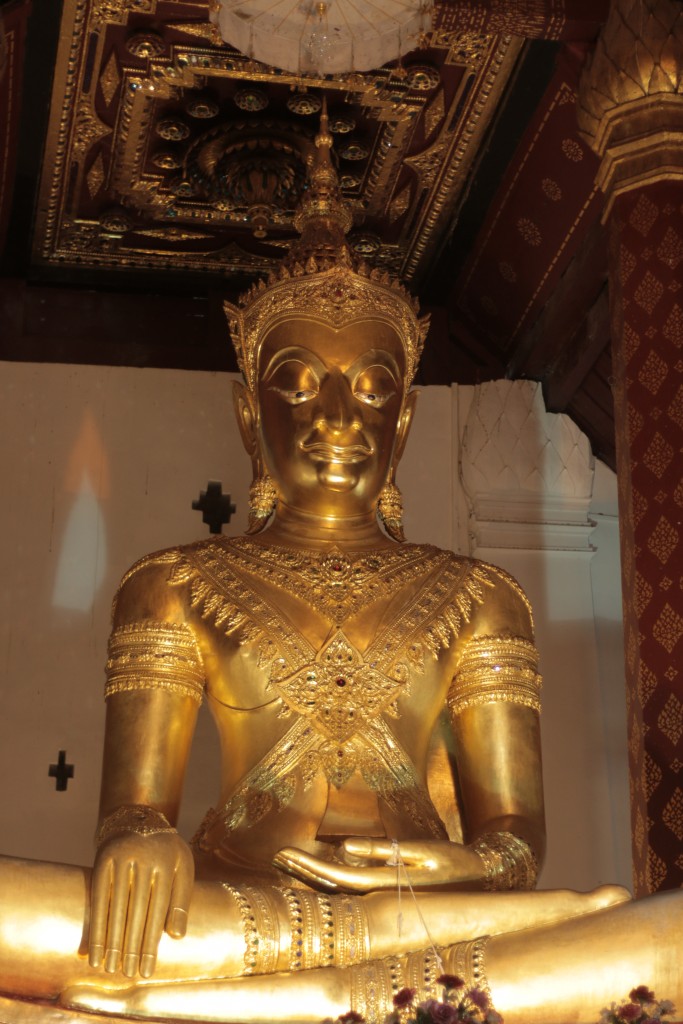 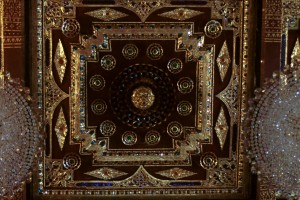 To end with, I visited the almost 40 meter long reclining Buddha, known as Wat Lokaya Sutha, by far the biggest Buddha image of Ayutthaya. Look at the person in the corner to have an idea of its size! It is said that there was actually a temple constructed around this Buddha statue, that did not make it through the ages. 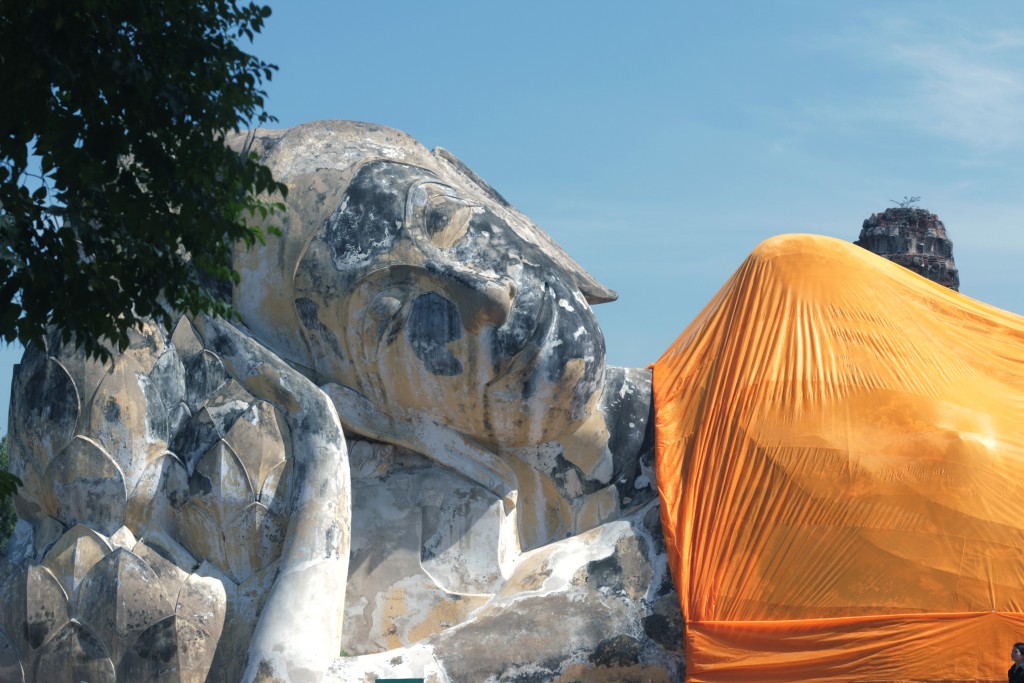 Walking through the ruins of what once was a glorious and powerful capital of a great Kingdom, it feels a bit like walking through the ruins of Rome. Is it really true? Do the Thai people look at the fall of Ayutthaya like the fall of Rome was viewed in the West? A poem written in 1957 by Angkhan Kalayanaphong, a very known Thai poet, gives an idea of the heartfelt and somehow painful yearning to that glorious era of the history of Thailand:

Ayutthaya, your status higher than heaven come down to earth,
The power and merit of the kings of old built up
Beautiful chedis, palaces of Indra,
Pure gold on the inside and outside.

Luminous fortress of Ayutthaya,
Beautiful gates, strong towers.
Ayutthaya, more than a valiant heavenly phenomenon,
Like the regions of the gods,
Very much like heaven to the eye.

O Ayutthaya, excellent place, greater than heaven,
You have fallen, brave soldiers are not to be found here anymore.
Wasting the energy of those expert craftsmen that created you,
Scores of wild animals came to aggravate you, ground you smooth,
O great treasure.

Silenced, Phra Si Sanphet rolls in the soil.
Vultures, packs of dogs and swarms of crows eat
This side of heaven.
Tears run from the eyes of the spirit as blood,
Flooding and flowing, caressing the world which has fallen and died,
Its cities disappearing.

So, pulverized dauntless kingdom, ha ha,
O Ayutthaya, you resemble a burial ground.
Of the great heavenly place is left only a carcass,
There is only human blood in this arid world, o deep shame.
(translation and explanation by Arnika Furhmann: source here)

Poems glorifying the past of the Roman Empire are not uncommon to find either. Take the first and third verse of the 32(!) verses long poem about Rome written by Joachim du Bellay, a frenchman, in the 16th century (complete poem and references here):

Divine spirits, whose powdery ashes lie
Under this weight of ruins, buried deep;
Yet not the fame, your living verse will keep
From Hades’ halls; fame that will never die;

If we have power to make our human cry
Downwards, from here, to that region leap,
Let mine pierce the abyss, this dark steep,
That you might hear my voice from on high.

Three times circling beneath heaven’s veil,
In devotion, round your tombs, I hail
You, with loud summons; thrice on you I call:

And, while your ancient fury I invoke,
Here, as though I in sacred terror spoke,
I’ll sing your glory, beauteous above all.

Newcomer, who looks for Rome in Rome,
And little of Rome in Rome can perceive,
These old walls and palaces, yet believe,
These ancient archways; are what men call Rome.

What ruin and what pride, temple and dome!
Now she, of whom the whole world once asked leave,
Who tamed all others, tames herself: conceive,
She’s prey to Time, a leaf from some old tome.

Rome now of Rome’s the only monument,
And over Rome alone Rome wins ascent;
Only the Tiber, flowing to the sea,

Remains: of Rome. O, this world’s transience!
That which stands firm, Time ruins silently,
While what flows, against Time shows resistance.

Like the Tiber in Rome, the rivers and canals surrounding Ayutthaya are still there. Time ruins silently what stands firm, while what flows, shows resistance against time.
Absolutely true, and apart of cities, doesn’t this apply to every aspect of our lives?▪ 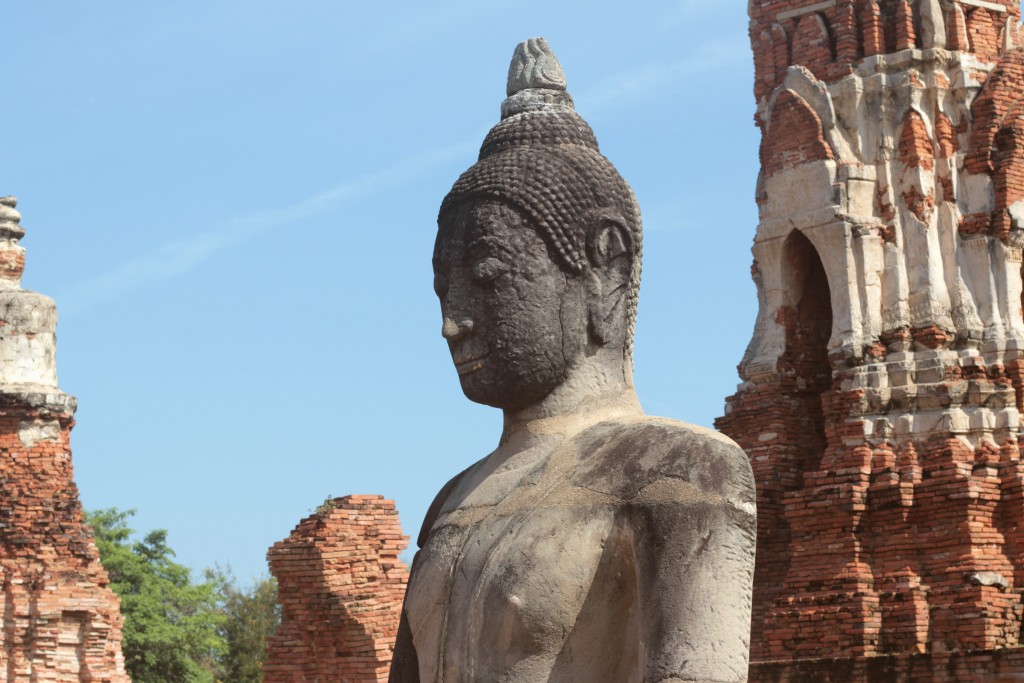