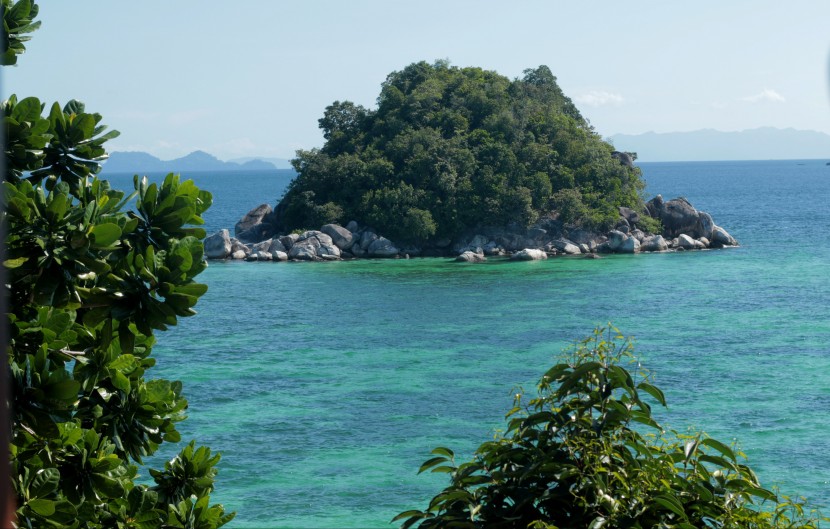 
Of all places in Thailand, I lost my heart to this island. Ko Lipe, I did not even want to mention you. Writing about Ko Lipe feels a little bit like revealing a secret. It probably awaits the same destiny of all other Thai islands, although I hope it won’t! 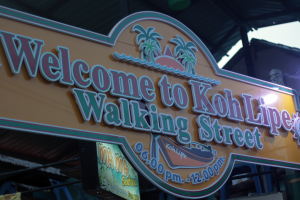 Here, the blue plankton still lights up the ocean at night, the coral reef is still in great state, but the jungle is getting smaller and smaller and what used to be a sandy road has now been baptized to “Walking street”.

The Urak Lawoi people, also known as sea gypsies (Chao Ley), were the first to inhabit this island and they are the ones directly facing the consequences of tourism. While we can not talk about overdevelopment yet, the changes that already have taken place in Ko Lipe are challenging the Urak Lawoi original lifestyle. Apart from “Walking Street”, I was so happy to find a somewhat “untouched” island after visiting Ko Phi Phi and Ko Samui, but someone who had seen Ko Lipe 3 years ago would already shake his/her head of disapproval.

The picture beneath gives an image of Ko Lipe as quite an undiscovered island. This part of the island was in fact more residential, but a couple of years ago this probably would have been a jungle as dense as what is covering the mountains. The roads would have been sandy if they even existed and there probably would not have been any road signs. 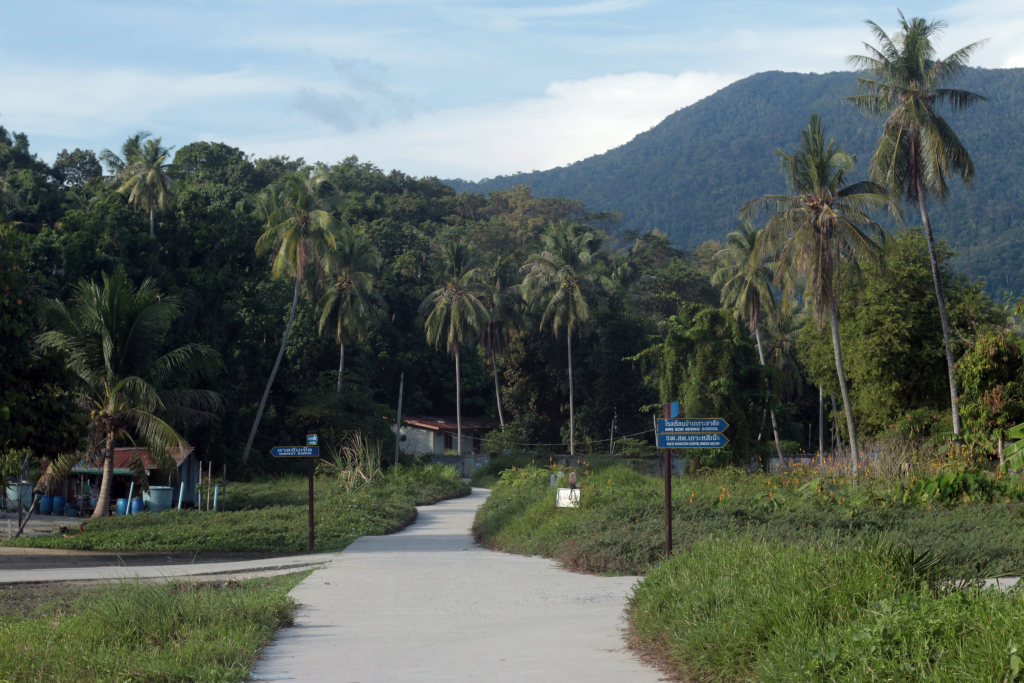 And this is when we talk about a part tourists don’t actually come. The reality of Ko Lipe is the following: 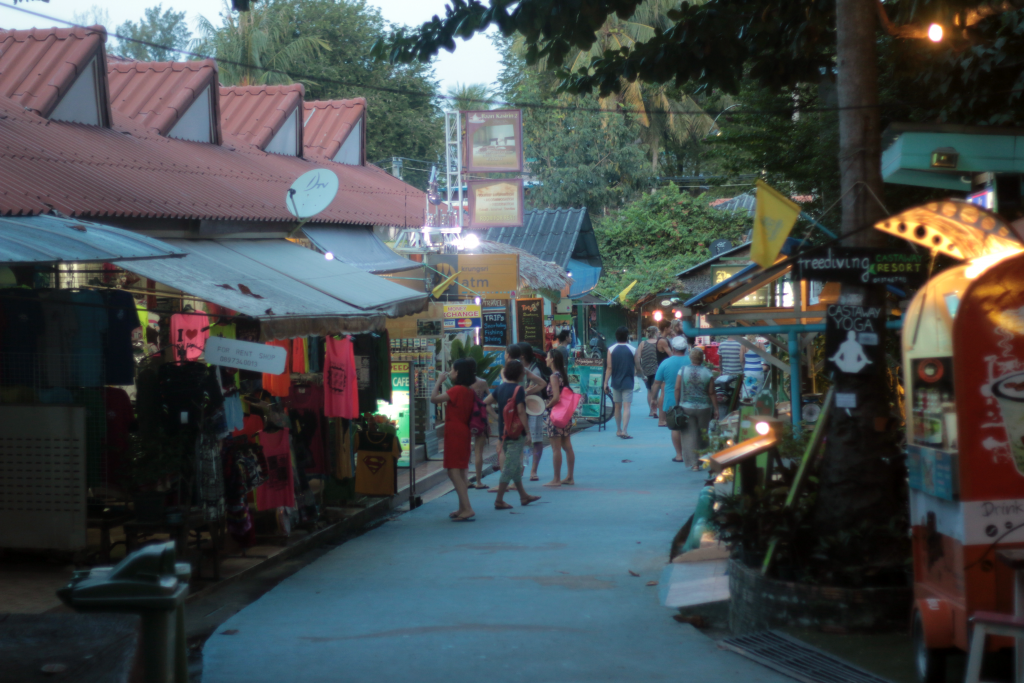 “Walking Street” is full of souvenir shops, restaurants, bars and coffeehouses. Even 7-eleven has arrived on Ko Lipe. It is hard to imagine that only six years ago a torch was needed to walk here at night.

As soon as I arrived in Ko Lipe, I was welcomed by the Walking Street sign. The busy street took me to the other side of the island: hardly a 10 minute walk. Ko Lipe has a triangular form and has three beaches: Pattaya Beach (the side of the harbor), Sunrise beach where the sun rises, and Sunset Beach where the sun… yes, you get it.

But, let us try to forget about these names, these artificial names in English obviously aimed to make it easier for tourists. Let us go back to the origin of this island: Pulau Nipih, or the Flat Island. This name was given by the first inhabitants mentioned earlier, the Urak Lawoi. The Urak Lawoi people descend of the Orang Laut. They led a nomadic existence on sea and were therefore known as the Andaman pirates. Over the last centuries, the Urak Lawoi people have been settling in various islands and coastal areas such as Ko Lanta, Phuket, Krabi and Ko Lipe. (source) 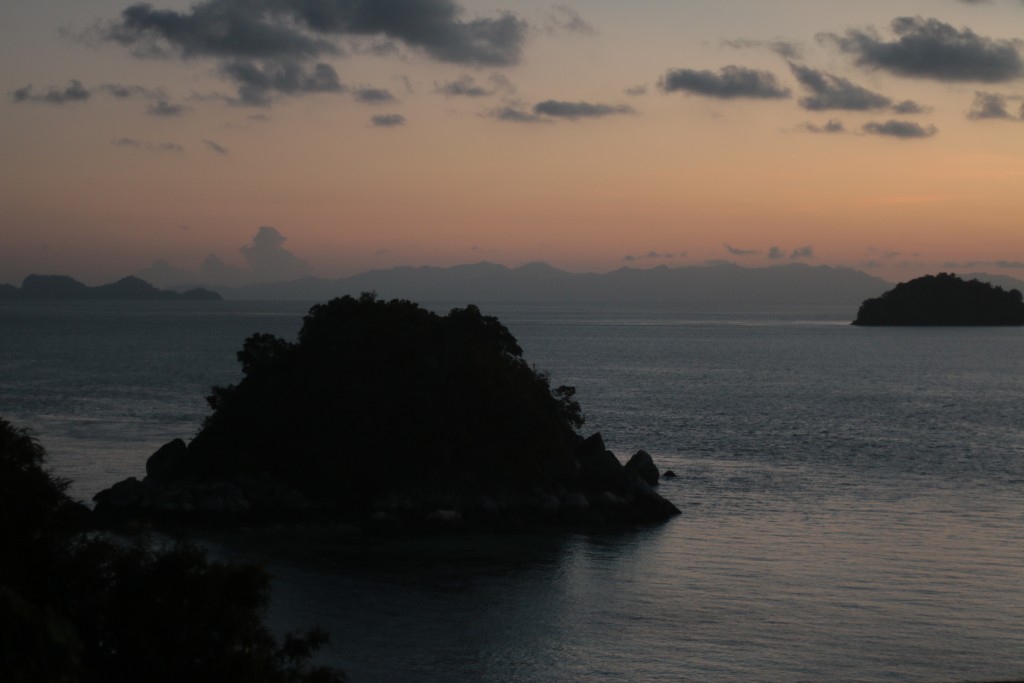 They have been facing all kinds of challenges for centuries, but now they might be facing the greatest one. The beautiful shorelines the Urak Lawoi call their home, have caught the interest of many developers, “investors” and other dollar eyed business people (or euro eyed, for that matter). On the ground where the sea gypsies have buried their ancestors, huge resorts are build to satisfy any tourist’s tropical fantasy. The Urak Lawoi, who, being fishermen, are used to reside on the beaches to get easy access to the sea, are forced to move further from the shore, as bungalows with a sea view are the most popular ones. This happens in Ko Lipe, but on touristy Phuket the situation has deteriorated to the point in which even violence is involved.

For a clear perspective of the situation I would like to refer to this article of the Nation, Thailand’s independent newsletter.

The article states, amongst other things: “The sea gypsies were of course there long before the developers and tourists arrived on Phuket’s Rawai Beach. Developers arrive, of course, with bulldozers, lawyers and complicated documents. In this case, it’s been claimed, they also brought thugs armed with sticks to chase the settlers away.”

Wait, is that even possible? What does the government do about this? The article continues: “Because of government-imposed restraints and encroachment on their traditional lands and way of life, the gypsies have been forced to take up the most mundane of municipal jobs, from garbage collection to sweeping the streets.” 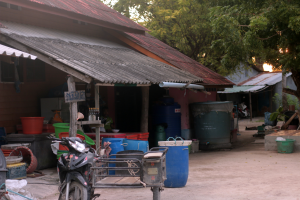 It is tragical irony: to reside in beautiful surroundings is more of a punishment than a gain. It is as if a curse lays on the beauty of nature, but it is not a curse: it is simply human avidity.  This avidity led to colonialism and horrific happenings such as slavery, and if you come from Europe (like me) chances are that you feel deeply ashamed of these black pages in history.

Fortunately, colonialism belongs to the past, doesn’t it? Let’s take a look at the definition of colonialism offered by google: “The policy or practice of acquiring full or partial political control over another country, occupying it with settlers, and exploiting it economically.”

If we substitute “another country” with “another people”, we could say colonialism is still going on: the indigenous people’s ground is being occupied by the official government, and by allowing developers to build on these grounds, they are also exploiting it economically. This looks like colonialism by all means!

What is it that pushes the government to ignore the rights of indigenous people? Financial reasons, that same old avidity. And what is an extremely lucrative way to make money? Are some kinds of tourism new forms of colonialism?

There are many researchers theorizing upon the effects of tourism, and neo-colonialism is a very common term. Here’s another definition (by Smith, Macleod, Hart Robertson: source):

“Neo-colonialism is a term used to describe the operations of capitalist forces in the era when colonial empires are no longer in existence. Instead of using force, neo-colonialist powers employ economic, financial and trade policies to dominate less powerful countries. Third World tourism is considered by many to be a form of neo-colonialism.”

What can we do? 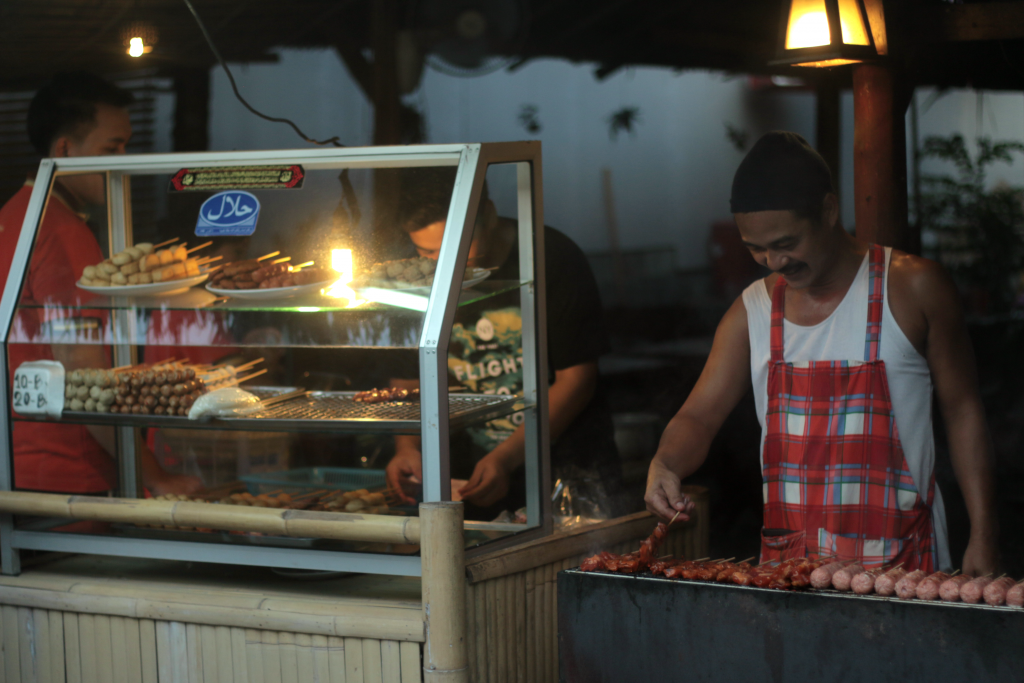 Obviously no one’s intention is to do harm to the place one travels to. And this is what is so tricky about what is happening: there just isn’t enough awareness to stand up against it. The injustice is hidden in our moments of relaxation, and let’s be honest: most of us do not think about the problems at home during a holiday, let alone the problems of the destination!

The bad news is that we are indirectly responsible for what is happening to the Urak Lawoi (and indigenous people all over the world). The good news is, we can be a great part of the solution as well.

So what can we do? Should we stop traveling to certain destinations? On the contrary! Tourism is very beneficial for the local communities if it’s done in a more sensitive way. All it takes is a little more awareness of the situation, more respect and sensitivity for the environment you choose your holiday to take place.

Concretely, we can do the following things: 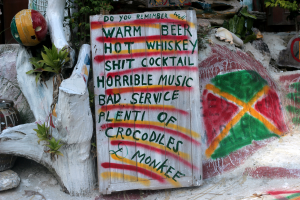 These are just little steps that you as an individual can undertake. Connect with the locals, you will be rewarded with amazing life stories and even long lasting friendships. On Ko Lipe, do not limit your walks to Walking street. Have breakfast at Ms. Nu coffee house on the street parallel to Sunrise beach, have some street food where the locals go,  and absolutely do not miss “Homebar”, the most beautifully decorated bar of Ko Lipe, completely made by the owner’s hands, Mr. Nor! Not only will he make you feel at home in Homebar, he also will share his vast knowledge of Thailand’s history, buddhism and anything you would like to know of the Thai culture.

Watch a short documentary I realized in Ko Lipe here.▪ 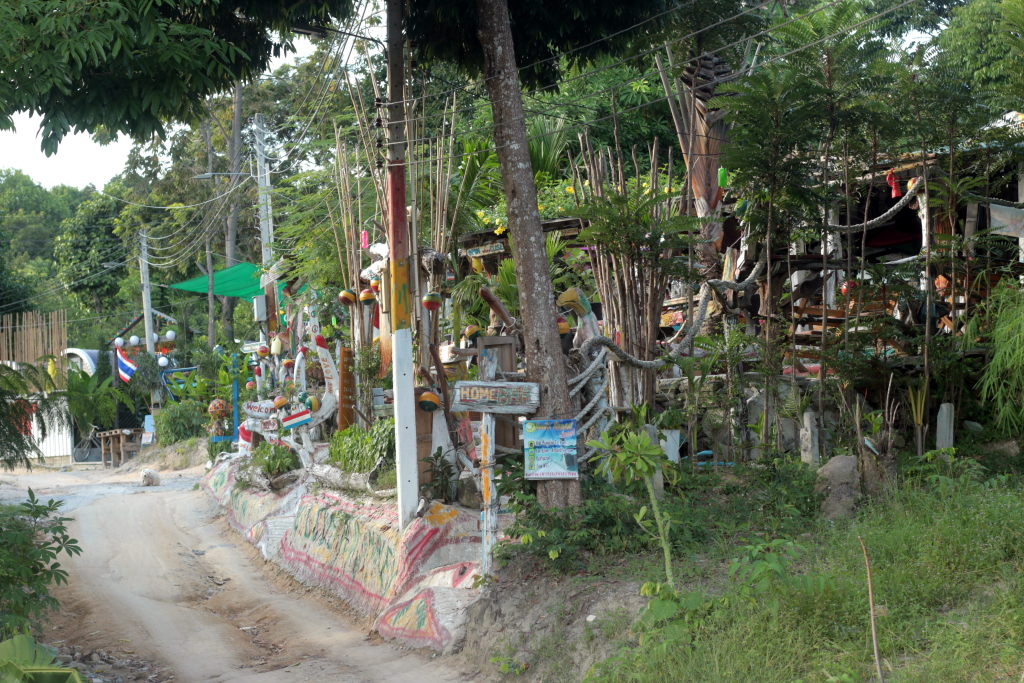