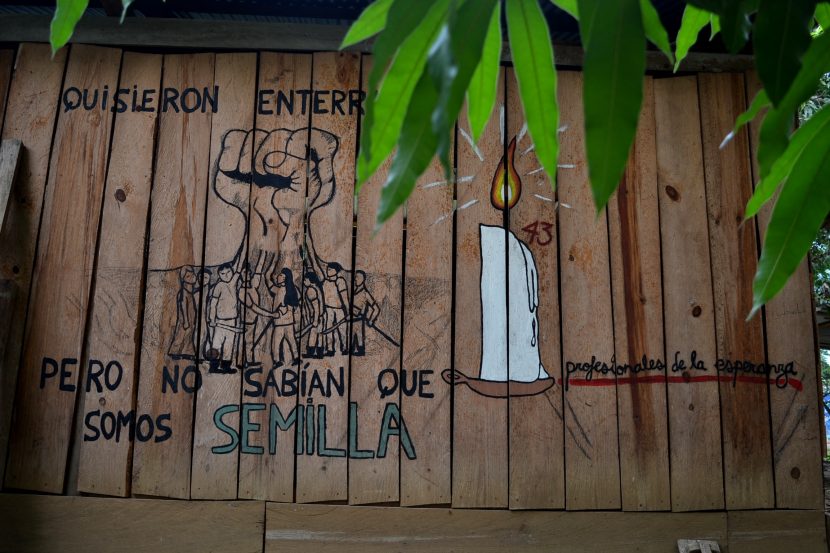 It was time to say goodbye. Our Zapatista supervisor thanked us for the last time, for the peace that me and my colleagues from Argentina had been able to preserve. How? Just by being there.

We had just finished our week as human rights observers in the heart of the Zapatista movement. In the middle of the Selva Lacondona was where insurgente comandante Marcos started EZLN, Ejercito Zapatista de Liberación Nacional (Zapatista Army of National Liberation), and we were in the very same place 20 years later.

Read about the Zapatista uprising here

We came to a Reality so different fom ours in many ways. I spell it with a big letter R, as we came to the reality in a literal sense as well: we were in community La Realidad, part of the first “caracol” of the 5 caracoles zapatistas, and therefore called “Madre de los caracoles del mar de nuestros sueños.”

Since 1994, the indigenous have started to neglect the “bad government” and taken control of their grounds. They divided their territories in the five so-called caracoles (translatable as snail houses) because “aunque lentamente, se avanza.” (“Even though slowly, we move on.”)

Every caracol has its own government, “La Junta de buen Gobierno”, elected by the people every 4 years. The junta takes decisions whenever the people ask for it (“cuando el pueblo manda”), and only takes cases in account that are within the limits of where their sight stretches, as they say themselves. This is to say that the Junta is a valid institution for a small territory only, for a select group of pueblos (Municipios Autónomos Rebeldes Zapatistas) under that specific caracol.

The Zapatista communities are functioning societies. There is a Zapatista alternative for every social institution: they have their own education system and medical facilities. 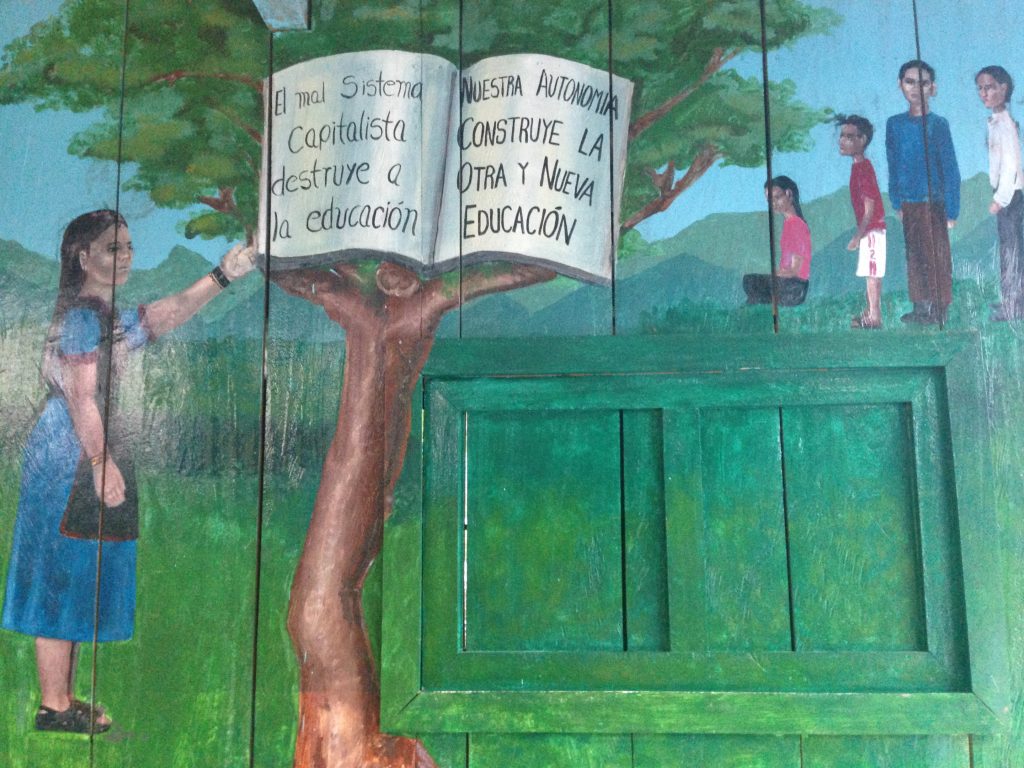 Every municipality is free to organize as they wish. In the case of La Realidad there is a primary school from Monday to Wednesday, where children of 6 to 12 receive classes from 7 am to 11 am, with a pause at 9.00 am. The teachers are “promodores de la educación”, who mainly teach the Zapatista kids to read, write, do maths and of course about Zapatismo in general. Not all kids go to the “Escuelita Zapatista”. The children of non-zapatista families go to the schools of the “Mal Gobierno”, or “bad government”. “Llevan los pinches uniformes, para que gastan dinero. ¿A que sirven los uniformes? ¿Para aprender más? ¡No! Para dar dinero al pinche sistema.”, says Juan*, our supervisor. “They are wearing bloody uniforms, to waste money. What are uniforms good for? To learn more? No! To give money to the bloody system.”

“In 1994 everyone was Zapatista,” says Juan, “but then the government started a strategy to divide the people. Slowly, families turned to their side.” The government has indeed started a strategy to create division within the indigenous communities, by bribing the families with money and privileges. If a family supports a political party, they receive contributes and products such as paint. In La Realidad, the painted houses are of the families on the government’s side, while those of the Zapatistas show plain wood, or Zapatista murales whenever they have the materials.

How do those families withdraw from the movement? “They never express it clearly,” says Juan. “You can tell because they stop being available. Whenever we’d ask if they would do things for the movement it would be no, no, no, all the time. Then you start to doubt, you do some research and there you go: another family has fallen.”

That is the situation of many indigenous villages: at one side you have the Zapatistas, at the other the sympathizers of the government.” At the beginning the situation was fine. We can’t force people to stick with the movement, they are free to believe whoever they want to believe. But when they killed our compañero Galeano, that was it. Now we are parted forever. Whenever a non-Zapatista used to come to our hospital, we would help him, but after Galeano’s death we are sorry, they will have to go to the hospital of the mal gobierno.”

La Realidad is segregated, like many villages in Chiapas. There is tension between both sides, resulting in violence, such as the death of Zapatista teacher Galeano, a very respected man of the community (article about the assassination in Spanish here), or the masacre in Acteal in 1997. Some of the sympathizers of the government turn into paramilitary groups terrorizing the Zapatista community. They carry out the dirty work so the Mexican army can keep their hands clean, and the government can maintain a clean image internationally.

One way of preventing violence from happening is by having human rights observers in the communities. From the moment that Galeano has been murdered, Zapatistas of La Realidad have started asking for the presence of human rights observers. As such observers we stayed in a so-called peace camp in the middle of the village.

For our safety and to avoid conflicts, our freedom of movement was confined within the fences of the camp, which was a piece of ground with a couple of wooden buildings: a kitchen, which had a fire place to cook upon, a building where all the wood was stocked, and a hollow building where we could set up our tents and hammocks. Also to our service: two toilets, basically holes in the ground.

La Realidad: a look at a future reality

My stay in the camp, although in the heart of a conflict, had something of a peaceful retreat. I woke up in the early morning, at sunrise, with the nature sounds accompanying the start of a new day. Across the fence I could see the men walking with their sickles to the cornfields, while some women already were washing their clothes in the river just next to our campamento. I listened to the flowing water, which later on would mix with children’s voices giggling and yelling, having fun. They often came playing in the river. The boys especially, as the girls of the same age (starting as early as 8 years old) were busy doing house cores. They’d wash their family’s clothes, after which they would happily join in.

I look at the children,  they look back at me. Some are so small, they never saw people from outside their communities. They stop and stare with big eyes, full of curiosity. Some come closer to say hello, others rather stay watching us from a distance. All of them know they are not allowed to talk with us observers. “We had to tell the children to stop interact with observadores because the non-zapatista children come to play in the river too. It’s important that they don’t hear things from you that they can tell to their parents. But how can you say to a child he can’t come and talk to you because his or her parents are not zapatista? No, children have no fault in this, so we made this rule for all children.”

Juan looks at the children too, and sighs. “They are not aware they receive privileges because of us.” He is talking about the non-zapatista families. “The moment we let go of our lucha, the government will lose interest in them and all the privileges will stop. They will see in time…”

This calls for a new question. When will their lucha, their battle stop? What is the Zapatista objective? As I am writing these questions, my pen (I always write everything by hand before typing it on screen), bought in a “Zapatista-shop” (shops that support the communities) gives me a kind of answer. The writing on the pen: “Queremos un mundo donde quepan muchos mundos” or “We want a world with room for many worlds.” 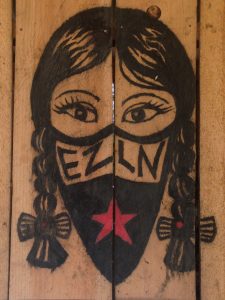 The Zapatista movement wants a revolution, but different from other revolutionary movements, it does not want to take control. Their very own structure is one of many worlds, in which the people take control of theirs. La Realidad, ironically, gave me lots of food for thought about our own reality. Could it be true that “control” of large scales cannot function? Surely the Mexican government in Mexico-City has no clue (or no interest) of how to deal with problems in Chiapas. The government of my reality, although I do not always agree, functions pretty okay, but then again we are talking about a country as small as a 3-hour drive from north to south. So, could that be indeed the answer, a future of smaller communities? Governments on smaller scales? The Zapatistas got me thinking and questioning all my apparent certainties. Seven days of Zapatista reality have definitely had impact on me.

“We thank you with a big heart for having contributed your grain of sand, I believe that you are here because you understood that we all have one enemy in common, the bloody government that won’t share its resources with its people.”

I am starting to believe that he is right.▪