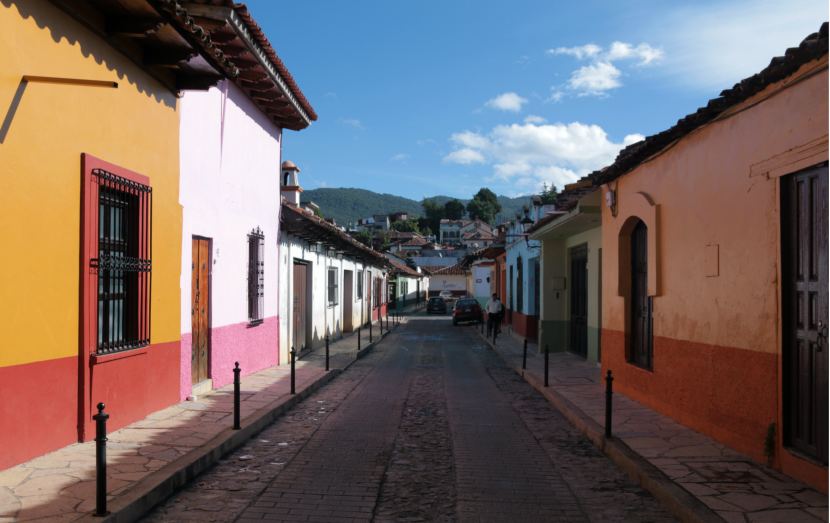 
A known saying goes: “The road is more important than the destination.” Nothing is more true than that.
I was on my way to Mexico but the historias mexicanas found me before I even arrived.

On the plane that would take me straight to Mexico City, a woman took the seat next to mine. She was a gorgeous Mexican woman of around 50, and turned out the be a source of a million stories. Suddenly, all that I had read about Mexico became real. The facts gained colors, the people got faces, and every event became closer, as the lady continued telling about her family’s history. Great grandparents surviving hunger during the Mexican revolution, stories of pueblos, ranches, priests: through her words I was transported to a colorful Mexico of the past, as the plane was transporting me to Mexico of today.

Eleven hours later, I arrived in Mexico City. Having slept there just one night with my second flight scheduled the next morning, I can be very brief about my experience: nice people, and lots of sirens at nights.

The next day, I had my flight to Tuxtla, capital of Chiapas. This time I was introduced to an odd way of organizing flight informations: the gate number on the screen was incorrect, and to know the correct number one had to inform at a special passenger information desk. Everybody stood in line asking their gate number. I must have gone six times to ask mine. The lady kept answering: “Todavía no…”, “Not yet”. “Come back in 20 minutes!” Alright, I said, even though my flight would be in 30 minutes. Instead of being a control freak, I relaxed. I figured out that this Mexican rhythm could actually be very healthy and I saw how I enjoyed letting go. As if it was meant to be, I was carrying a book someone dear to me had given me before leaving for Mexico. The book was an introduction to Chinese philosophy and Tao, and it was very suited to what I had to learn in Mexico: letting go of control, and let the flow of life take you wherever.

Eventually, the flow brought me to gate number 9. And 1,5 hours later, in Tuxtla Gutiérrez airport. In Tuxtla, however, a greater ordeal awaited me. I went to buy a bus ticket and I was told there were no buses. “Today traveling to San Cristóbal de las Casas is impossible! They blocked the road!” They?

With the book of Tao in mind I kept my calm and I said to myself: I just would like two things. To arrive in San Cristóbal before dark, today, and if possible, to find someone or a group to travel with. I walked around in the arriving hall looking for some groups heading to San Cristóbal too, but nothing. I’d have to travel on my own. I prepaid a taxi at the desk and as I finished paying I heard a girl asking for a taxi to San Cristóbal. Perfect! I look beside me and I see this couple, as lost as I am. I ask them if they’d like to share a taxi, and off we go. They are a food journalist and a designer from Australia, traveling through Mexico. 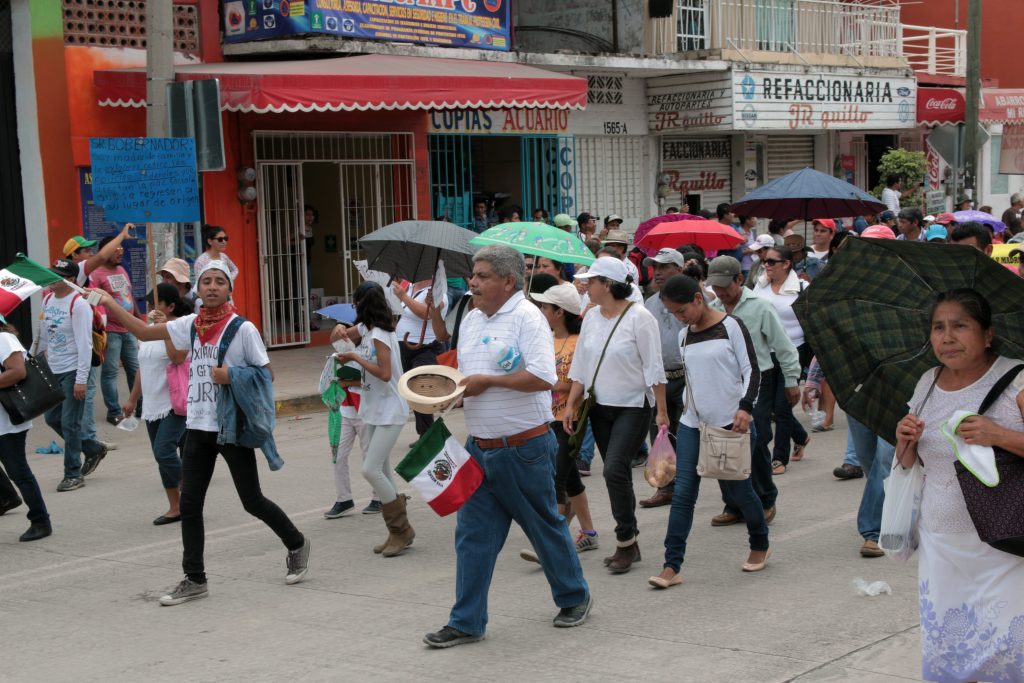 While driving, the taxi driver said: “I can only go as far as possible, I’ll drop you off just before the block, from there you will have to walk to Chiapa de Corzo. There you will find transport to take you to San Cristóbal.” I asked him why the road is blocked and who was responsible for this. The indigenous, he said.* “Porque el gobierno no hace lo que promita”. “The government doesn’t do what they promise.” I pretended to know nothing about it. “So they are right to do these protests?” Yes, replied the taxi driver. “Pero afecta a todos. Y pasa muchas veces, hace un mes del ultimo bloqueo.”  “It affects everyone. And it happens all the time, one month ago was the last blockade.” So here I was, trying to travel to my destination, confronted right away with Chiapas and its conflict, of which I had read so much. Again, written facts became real, became experiences I was living in person.

Getting through a protest blockade in Mexico

As soon as we were dropped of, we started walking. Cars and people were obstructing the road. A man came to us. “It’s a dangerous situation”, he said in perfect English. “I am going through the blockade right now, if you want you can come with me.” So we went. It was unreal to walk between the cars, the men whistling and catcalling, the hot sun and a huge backpack leaning on my aching back. Tao, I reminded myself: “Flow with life!” Maybe a bit naïve, but I was way too fascinated to be afraid or worried. This kind of rush is inexistent in most of Europe, where I come from. Suddenly, the man stopped and turned to us: “I continue to Tuxtla, you guys should head that way, that is the best if you want to go to San Cristóbal de las Casas.” The three of us kept on walking, beside us a highway. From a distance we saw a Taco truck, apparently ran by the whole family. The granny stood flipping taco’s and the teenager would fish for the clients. “Aquí hay taco’s!”, he yelled to us. Not so bad, we thought, to stop at least for a refreshing drink before the trail. 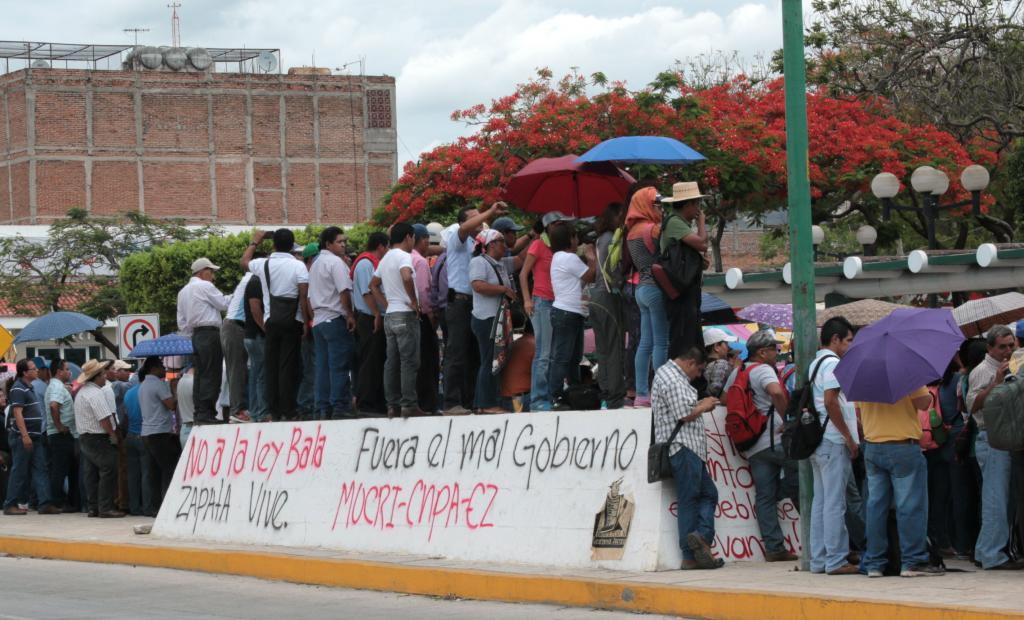 We got a red, typical Chiapaneco juice (forgot the name!), and asked the boy how far it would be to Chiapa de Corzo. His eyes became large, in english he replied: “Chiapa de Corzo? That’s about 3,4 miles, that’s a walk of an hour or maybe more!” The three of us looked at each other, again we were flushed by surprises. “Well,” we said, “We need to get to San Cristóbal and we were told to walk over to Chiapa de Corzo, walk through the blockade, and take a public transport from there.” As we were talking, we noticed how taxi’s would drive in between the two presumed blockades. “Couldn’t one of those take us to the next bloqueo?”, we asked pointing to the taxi’s driving by. Without saying a word, the boy went straight to stop a taxi for us. Once we had that settled, an exchange of idea’s with the taxi driver took place. We told him our intention but he, a big man with a little moustache, looking like something between a gangster and a teddybear, kept shaking his head. “No, no, no. Mejor la estación de Tuxtla. Están colectivos que hacen rutas alternativos!” “There are busses who take alternative routes!” We decided to take a chance on that.

We were dropped in a street with at least 30 people waiting at a bus stop – the presumed bus station. We seemed to be the only foreigners between the resigned-looking locals. “Por San Cristóbal de las Casas?” “No hay,” nothing, I was told over and over again. It looked like we would never get there that day.

Mirage of the Pueblo Mágico

Another guy came up to us. He was the one working for “the colectivos”, small buses mainly used by locals. He told us colectivos would take us to the blockade, so basically back to where we were before the taxi. Did the taxi driver lie to us just for 20 pesos? 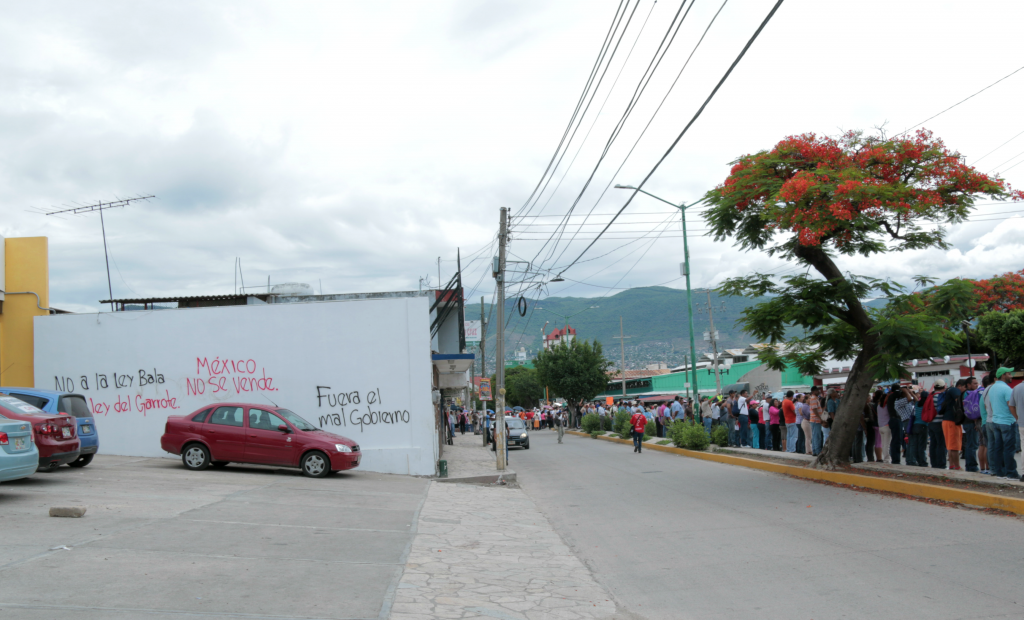 We got in the colectivo and took the last seats left. The vehicle headed back to where we came from. We felt so betrayed… Until at one point, it took a turn to an ascending bumpy road. The vehicle went up, and up, and as we were shaken from left to right we came across little pueblos with traditionally dressed women and men, the indios, ranches and forgotten homes, horses waiting patiently for its owner to return, and as we went on the buildings made more and more room for stunning looking nature. Green valleys alternated with dry mountaintops, rivers and cascades flowing through both of them. And the birds, the majestic looking black predator birds circling high into the sky. This is Chiapas, I thought by myself and I let myself transport over the rocky road and in my mind, back to the Maya civilization of ages ago.

After 30 minutes, I was sure. This colectivo was not bringing us to the bloqueo, it would bring us straight to San Cristóbal de las Casas. I was so relieved I didn’t dare to ask. “Let’s just see where it takes us.”

It took as further, and through a village called Acteal, pueblo where 45 innocent indigenous people were killed in 1997, one of the most horrifying crimes committed against human rights of the last 20 years in Chiapas. How strange to be here traveling through places that were merely names in a book, seeing the people I only heard of in forms of statistics.

On the notes of a hollywood movie in the DVD player about Mexico (with all stereotypes included) the colectivo took us onto the mountains. Then, a turn, a vast city rose between the mountains. A sign took away all doubts. “Bienvenidos a San Cristóbal de las Casas, el Pueblo Mágico!“▪

*Later on, I learned that it was a teachers’ protest against an education reform; proof of how easily the indigenous are being held responsible for all kinds of protest movements. Read here about the teachers’ movement and how their human rights are being violated terribly.